‘Are Dogs Better than Cats?’ or How to Connect People using Mobile Technology

We had the pleasure of being creative collaborators for the inaugural TEDxPortland event–contributing our digital expertise to enrich the event experience. One of the pieces we worked on was an interactive networking “game” connecting attendees and digitally augmenting their networking. 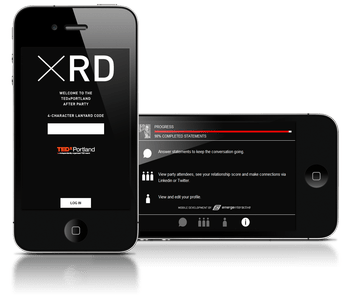 We had the pleasure of being creative collaborators for the inaugural TEDxPortland event–contributing our digital expertise to enrich the event experience. One of the pieces we worked on was an interactive networking “game” conceptualized together with Wieden+Kennedy (the event’s lead sponsor) and Second Story (Portland’s interactive installation experts). The project’s goal was to connect attendees and digitally augment their networking (Emerge developed the web and mobile components for this project). It was primarily targeted at an exclusive list of attendees that were invited to the celebratory after party on Wieden+Kennedy’s rooftop deck overlooking Portland.

The experience started when you received an invitation email. Via a link in the email you were taken to a unique RSVP page, which presented you with a form–prepopulated with your information– allowing you to also connect your attendee profile with your Twitter profile and LinkedIn account (via OAuth). The last step was to answer three questions, and this is where the game itself began:

One hundred divisive and controversial questions were selected upfront to make the players think twice about their values and beliefs. The questions included the serious (“Technology is making us more alone than ever”), political (“Nuclear energy is the answer”), and fun (“Dogs are better than cats”). Part of the challenge was that each question could only be answered with “agree” or “disagree”, forcing players to take complex subjects and simplify their values into binary answers.

Once at the party, attendees could answer the questions in one of two ways: via a futuristic touch-screen installation that was activated by placing your lanyard on a scanner, or a mobile website that was accessed using a code on your lanyard. As players were answering questions, a big screen displayed real time results showing how the audience at the party voted for individual questions (all data visualization were anonymous so no one knew exactly what your answers were). 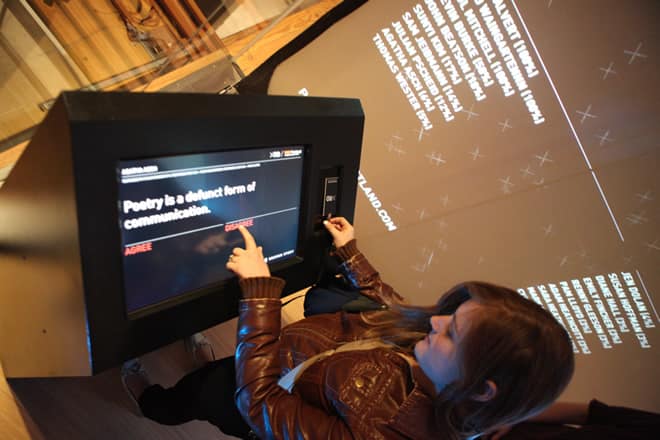 For the mobile experience you weren’t only able to answer questions, instead this is where the digital networking took place. You were able to view a list of all party attendees ordered by a real-time relationship score that indicated how similar you were to other individuals at the party. If you answered questions in a similar fashion, your relationship score for that person was high, otherwise it was low. After finding people with similar qualities you could pull up their Twitter and LinkedIn profiles right there from the app and connect. 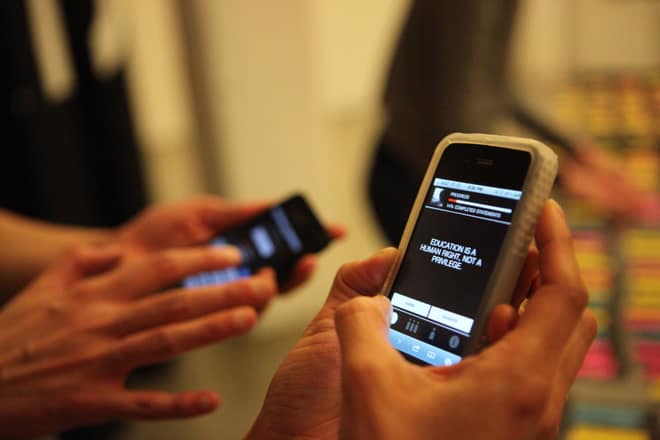 The game was a big hit, with players still answering questions through the mobile site days after the event and using it to connect with other party VIPs (or looking up the names of the people they met but couldn’t remember due to too many of the signature cocktails). For us it was a fun opportunity to collaborate with some of the brightest minds in town. 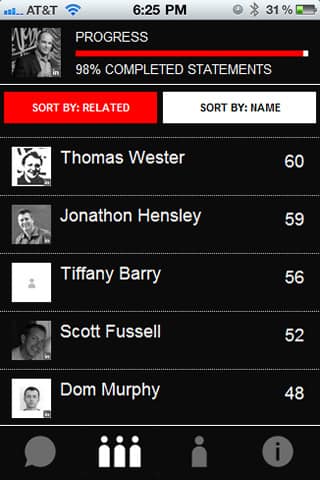 The mobile site was developed in HTML5 using the Sencha Touch framework, themed to match W+K’s TEDxPortland branding. All data was communicated to Second Story’s server using a JSON+REST interface for persistent storage and visualization purposes. [We also developed a native iPhone/iPad application using PhoneGap, but deemed it unessential to go through Apple’s approval process for a single day event.]

View all photos from the event