‘Building a Magic Canoe’ at TEDxPortland

I was fortunate enough to attend my first TEDx event here in Portland, Oregon, which happened to be the first annual one in the Rose City. It was a great one that sold out within days of tickets being available and it wasn’t what I expected it to be. I didn’t expect the inspirational moments this gathering of people offered. Nor did I expect the many tearjerker, heart-wrenching and heart-warming moments. I’m thinking, it might have had something to do with the theme of ‘XRD’ or crossroads. When you’re at a crossroad, you’re usually confronted with some tough choices. When there are different forces converging at a crossroad, which way would you go?

Emerge Interactive happened to be a ‘creative collaborator’ along with Second Story in working with Wieden+Kennedy for the TEDxPortland event. Rather, the after party but more on that later, stay tuned for Part II. It’s always nice to get shout-outs as a creative sponsor. 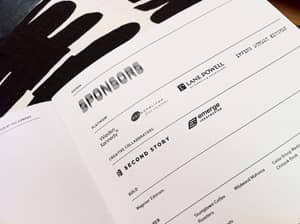 It was a long day at the Gerding Theater at The Armory, which was the first building to be Platinum LEED certified globally. A very appropriate venue for the dozen speakers with topics ranging from cancer research, native cultures, community, environment, architecture, art, food and of course technology and how it all inspires and relates to us regionally and globally. 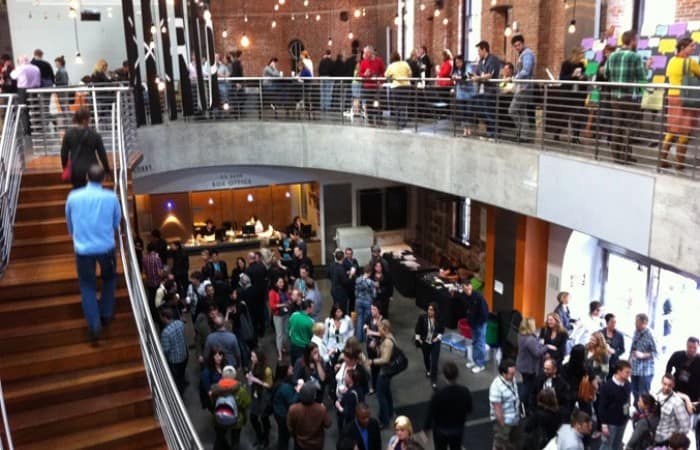 Here are some of my highlights and take-away’s from the day.

The music performances were right-on the money. A shout-out to my alma mater, University of Oregon’s a cappella group, ‘On the Rocks’ (as seen on “The Sing-off”) came out and did a few numbers. The School of Rock bands ROCKED!! I thoroughly enjoyed their performances. Rush’s ‘Freewill’ was their first song, really? RUSH impressive. 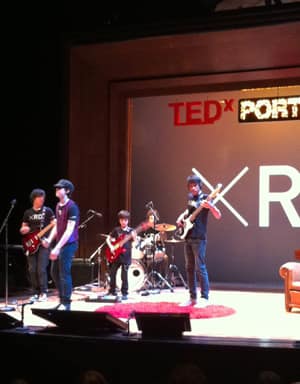 One of the tear-jerker moments was when PHAME came on stage and started with ‘Heart of Gold’ by Neil Young, then went on to Lennon’s ‘Imagine’. It was hard to keep the tears away. 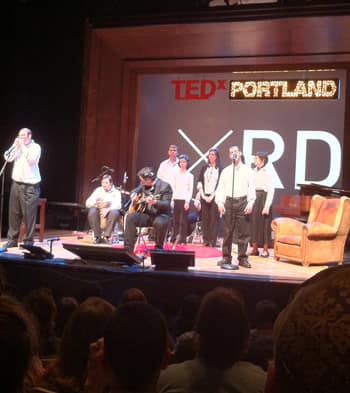 ‘Be a bamboo farmer and water the bamboo.’ If you want to learn more about what this is all about, check out Greg Bell, founder of Water the Bamboo Center for Leadership. He is an inspirational speaker and author who spoke about the philosophy of patience, perseverance and hard work. 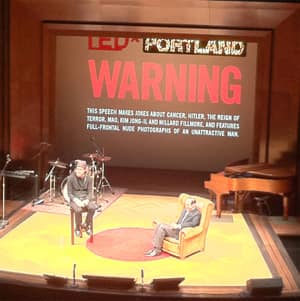 Another tear-jerker moment was from the talks with Jim Riswold, named “one of the 100 most influential people in American culture,” by Newsweek and Dr. Brian Druker, whom Riswold credits with saving his life. Oh, and Riswold started by proclaiming that Hitler also saved his life while introducing his first slide giving a big WARNING to the audience. This was a talk from a cancer survivor and how art helped him through the whole dang process. All the while featuring the doctor instrumental in getting imatinib FDA approved in record time with successful clinical trials conducted right here in our yard at the OHSU Knight Cancer Institute in Portland, Oregon.

There were a lot of moments like these from all speakers. Roberta Connor talking about the Tamàstslikt Cultural Institute and all her work for the indigenous cultures of the region and beyond. What if your language no longer existed? She urges us to ‘think longitudinally’. “Think of your descendants 1000 years from now.”

Switching gears to talking about development and architecture, Mark Edlen asks if being LEED certified is enough. Are we making a difference? The new parameter should be the idea of ‘net zero’. He would like us to think about measuring the success of a building to what’s right outside it’s doors in the first 30 ft. Think about it.

Then John Jay, ECD at Wieden+Kennedy, gave an inspirational talk on spiritual, economic and cultural transformations using personal, architectural, design and development examples from around the world and here in Portland. I’m really excited for what’s coming up for us here in terms of some revitalization and development!

There was so much more! Scott Kveton, CEO of Urban Airship, took us down memory lane of social media and how open source came to be mainstream. There was an audience participation experiment around food and the idea that ‘food is trust’. We learned of purple carrots and the ‘carrot whisper’. (Gotta track him down at the farmers market.) Genevieve Bell, Director of Interaction and Experience Research at Intel, asked us to think about being bored and demanded that we go out and ‘be bored’ for a little while and see where it takes us.

I’ll conclude my personal takeaways from yet another awesome Portland event with how I came to title this post, ‘Building a Magic Canoe’. This idea was from Spencer Beebe’s talk, Founder and President of Ecotrust. He told a story of Cecil Paul, a Native American elder that Beebe worked with to help protect a significant amount of land in British Columbia. (I can’t do justice to this entire story; you can get the full story from Spencer’s book.) The idea behind the ‘magic canoe’ is that it gets bigger with more people in it, learning to paddle together.

Thus, let’s paddle together through our crossroads and the river that runs through this ever connected growing global village. 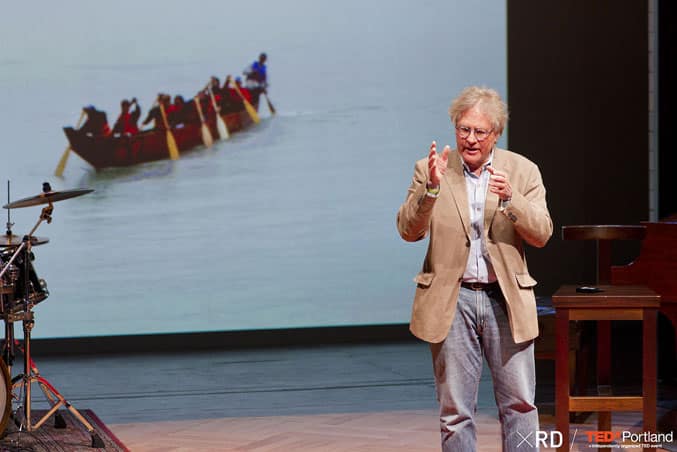 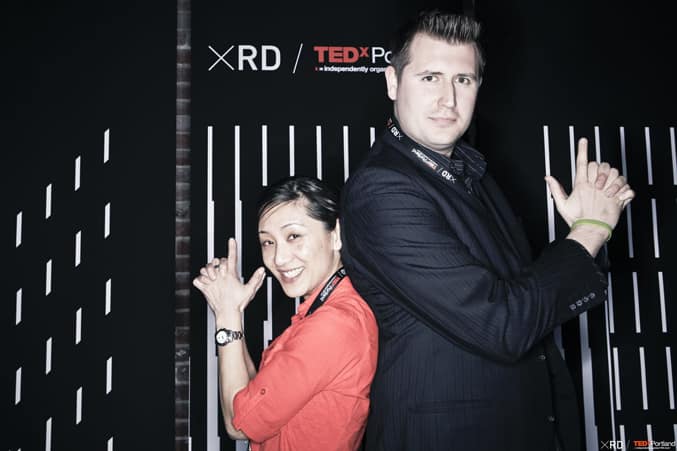 © Me and the boss, Jonathon Hensley, all rights reserved by TEDxPortland