Glacial melt, climate swings, floating continents of plastic waste; as we stop to recognize Earth Day it’s easy to feel environmentally impotent. The scale of the issues we face is enormous. It’s bigger than all of us, yet it’s composed of the seemingly minor decisions we make each day. 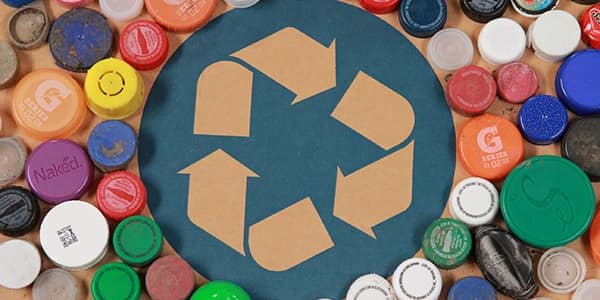 We recently watched a movie trailer for Chris Jordan’s feature-length film about his journey to Midway Atoll. Midway is a nesting refuge for seabirds that also happens to be located in the heart of the Great Pacific Garbage Patch, an eddy of modern plastic waste. The islands’ birds mistake the plastic for food and feed it to their chicks (about 5 tons of it each year) who often die as a result.

Watch the video trailer, and you’ll see a familiar object repeatedly appear in the bellies of the birds photographed by Jordan: the plastic screw-top bottle cap. It’s an object most of us use every day. These little conveniences of modern packaging happen to make excellent boats. They flow into the open ocean where they journey with the currents until they’re snapped up and swallowed.

In recognition of Earth Day, we spent the past five days retrieving discarded caps from around our neighborhood. By collecting and recycling them, we know these caps won’t end up on the beach or in the diet of baby seabirds. It’s a small gesture, but one we know can have a real and immediate influence on the health of the Pacific.