Transforming the Audience's Mobile Phones into a Crowd-Sourced Interactive Display

Smartphones and sports venues make for an interesting combination. They’re already used to increase the convenience factor at sporting events, allowing attendees to order food and drinks to their seats via their phones and augmenting the experience by providing additional real-time game information and video feeds to their seats. Audience participation apps are becoming more popular as well.

As a leading digital experience agency we prompted the question of what the smartphone can do to not just improve the experience for its owner, but for everyone in the stadium–particularly if there are thousands of phones that are linked together.

Here are some of the initial ideas we pursued:

In the end we opted to pursue the concept of controlling the phones’ screens. We were guided by the vision of a basketball arena with dimmed lights before the game and 20,000 roaring fans holding up their phones. This would turn the stands into a massive full-color screen. A similar concept was used at the 2012 London Olympics using fixed mounted LED displays. The goal is to combine 20,000+ iPhone and Android screens to create a single display that spans the entire seating area of the venue. For example if a venue has 50 rows—each with 500 seats—then with everyone in the audience holding up their phone we would have a “display” resolution of 500px by 50px. Not quite HD resolution, but it could allow us to create some fun animations.

The London Olympics execution had 70,500 light sources embedded in the stands that allowed for some fantastic animations during the show.

Another example that inspired us was AQKA’s implementation of Carol of the Bells using synchronized smartphones.

So we set out to develop an iPhone app prototype that would test the feasibility of doing something similar using the crowd’s smartphone screens. Right out of the gate we came upon some limitations that would test the concept and the very limits of people’s devices:

So we set out to build a prototype that would conquer these limitations and prove the concept feasible. We broke the challenge into two main components:

For the server side we selected node.js and socket.io. To start we created an authoring web interface that allowed configuring a multi-step full-color animation for up to 24 devices. 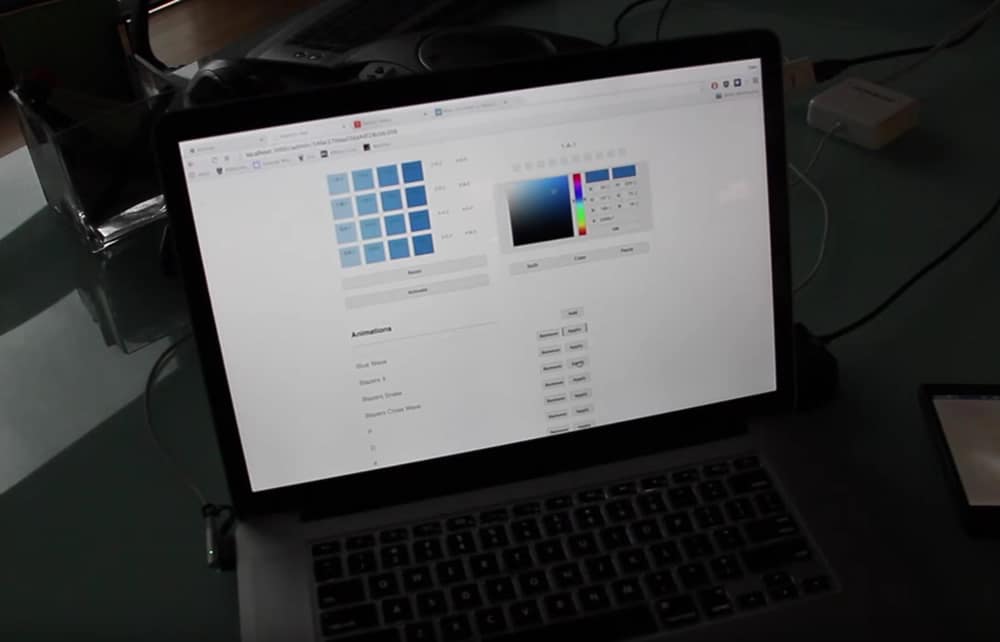 In parallel we started developing the smartphone client. We started off with a simple JS script that was receiving animation queues from the server. Each phone corresponded to a specific location on the animation grid, much like an audience member would enter their seat location when first opening the application.

At first this resulted in a very discoordinated animation due to latency in the animation start time between devices and difference in phone speeds when executing the color changes. We overcame those challenges by measuring the latency to each device before triggering the animation and driving the timing off the server time instead of the client’s JS engine. In the end we were able to prove the concept:

We then built the control software to load animations and map them to the seat maps of larger stadiums. Animations are imported from animated GIFs, which can be swapped out on the fly.

The next step is to run this with a larger group at scale and expand it to include Aruba’s Beacon Technology for ultra-accurate indoor location and navigation. We’re excited to take this concept to production, and work with partners who are being challenged to bring new innovation to their venues and enhance the experience of audiences.